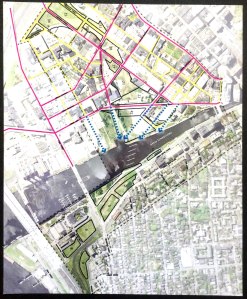 Here’s a reflective essay that I wrote around the first anniversary of this project, on Medium.

In conjunction with Denyse M. Wilhelm and James Ari Montford’s In Loving Memory.

This project took as its subject the upper harbor of the Providence River and its environs.  With it, I aimed to bring attention, and train my own attention, to some of the ways that primordial landscape features, like rivers, become enmeshed in human systems, including cities, and how the two co-determine each other across space and time.

Topographics was also an inquiry into whether and in what ways my embodied knowledge of the place and its formalized representations might intersect.

It was also a meditation on the city and the waterways from which it springs.

A FIELD JOURNAL, archived here, recording my almost-daily visits to the waterfront throughout the month of January 2017.   All entries were logged from a linear park on the eastern river bank, parallel to South Water Street, most from beneath a willow tree beside a boat ramp.  They detail my sensory experience of the place, subject to a range of endogenous and exogenous conditions.

SOUND RECORDINGS, still accessible here, from my visits to the waterfront.  There are twenty-two recordings in all, each approximately fifteen minutes long, the oldest from January 2nd and the most recent from January 30th.  In the project space, they were played chronologically, oldest to newest, in a five-and-a-half-hour loop.  Volume level could be adjusted up or down.

AND MAPS, mostly urban planning and data maps, of the river and its surroundings.  These ran across the gallery walls, left to right, in reverse chronological order.  The displayed images were cropped in such a way that most legends, keys and other explanatory elements were purposefully absent.  However, a book of source materials was provided for anyone who wished to see the maps as originally published, along with a selection of related excerpts from the same publications.

It should be noted that urban development along the Providence River was originally spurred in great measure by the Atlantic triangular trade.  Were it not for the institution of slavery, therefore, the port-rich colonial city might have never risen.

Past Projects and Writing